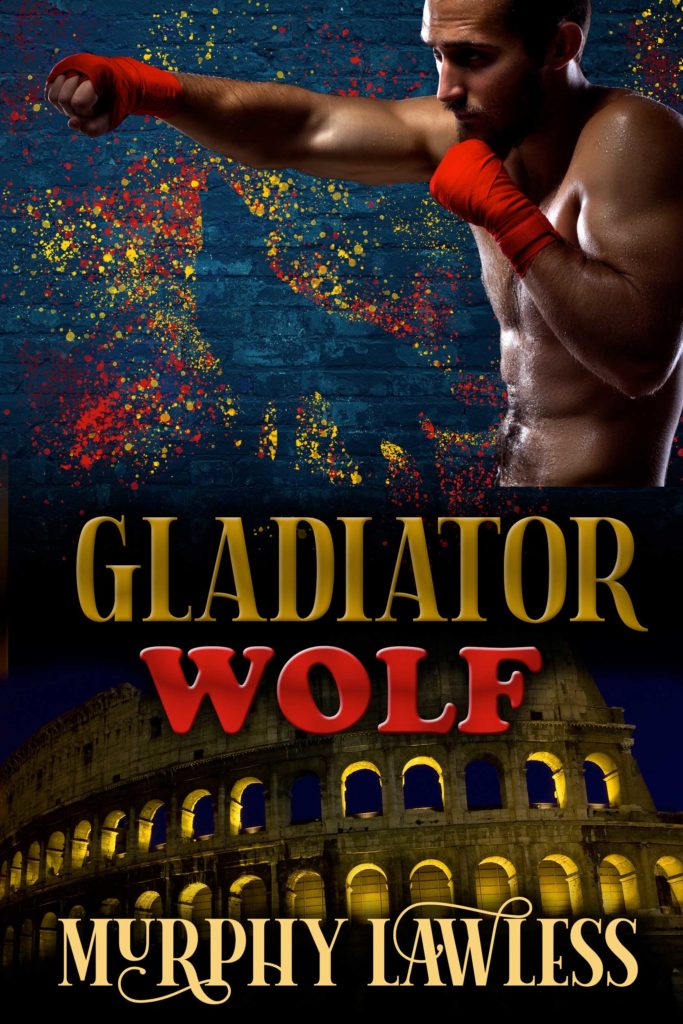 Part of the Gladiator Shifters series:

Their love could change the world...

Swan shifter Maggie Ross adores her life as a professional wrestler at the top of her game. But like every gladiator shifter, whose ancestors once fought, and bonded with, the beasts of the Roman Colusseum, Maggie is bound by magic to abide by the will of the ringmaster family who once ran the arenas, and now run the world's largest professional wrestling corporation.

Lone wolf shifter Conri Lyell has spent his life trying not to order other shifters around in the way his ringmaster heritage allows him to. But all of his efforts to play fair mean nothing as long as his family continues to abuse their power...and when his wolf recognizes a profound connection to Maggie, playing fairly becomes more important than ever.

Because historically, ringmasters don't have fated mates, and Maggie refuses to allow anyone or anything to push her into a relationship where she can literally be controlled by her partner. If Conri and Maggie are to build any kind of future together, they must first dismantle the entire system that keeps them apart in the first place.

Can determination overpower the ancient power of the ringmasters? Find out in GLADIATOR WOLF!

The smell of sweat and beer mingled with the roar of laughter and cheers from the stadium seating. There were thousands—tens of thousands—of people crowded into the seats. They'd been jazzed when they arrived, and hyped up by the pre-show theatrics. Now they were ready for the main event.

Now they were ready for 'Mad Maggie' Magdalene, six foot two of walking muscle wrapped gladiator greaves and a winner's belt that plated her belly like armor. Maggie cracked her neck, jittering, as if to warm up, and winked at the camera. The guy behind it grinned and gave her a thumbs-up, appreciating that she knew exactly how high she needed to bounce to make her leather-bikini-clad boobs rise into the bottom of the frame. Out in the stadium, where her image was being broadcast, people began to scream with excitement.

Maggie grinned back at the camera guy, and widened her eyes for the audience like lil' ol' me? You want lil' ol' me? She flirted her fingertips against her chest, helping to sell the question, and the cheers from the stadium redoubled. Maggie's grin broadened and she flexed for the audience, smooching one bicep and leaving a solid pink lipstick mark in the shape of a kiss there.

The audience shrieked gleefully. Maggie tossed her hair, flirting with the camera again as she waited for the big-voiced announcer to begin his spiel. He was already calling in her opponent for the night, an Amazonian Black woman named Sandra—Savage Sandy, AKA Suplex Sandy for her epic finishing move—and the crowd had gone nuts. Sandy played a bad guy most of the time, but rumors were flying that Maggie was going to lose the title tonight, and Sandra was the fan favorite for being a good guy—a 'face'—for a while.

They had no idea, Maggie thought gleefully. They had no idea what they were in for tonight. She curled her lip at the camera, showing disdain for Sandy's skills, and heard the audience's response split between her fans and Sandra's. Maggie flexed her fingers, encouraging the cheers from her fans, and for a moment, Sandy's followers were drowned out. But then Sandy made her entrance, and the roar became deafening. Maggie tossed her hair and pretended she was unimpressed, but her heart beat faster. It always did, just before she went into the ring.

A moment later the announcer was calling her name, listing her accolades: you knew her as sweet little Maggie Magdalene, straight off the farm, where she built all those muscles hauling hay and bench-pressing the tractor! The announcers always had some variation on that, and they always got a laugh and a cheer. Maggie's favorite was when she leg-pressed a horse trailer out of the mud, because she'd actually done that once. Granted, it hadn't been loaded, but that wasn't the point.

You saw her grow up, the announcer called. You learned how that angelic face hid a demon inside! You learned that she wasn't a sweet little thing at all, but in fact…Maaaaaaaad! Maaaaggie! Magdalene!

Maggie made her entrance on the last, jogging up the runway into the stadium. She felt as though she practically flew on the energy from the crowd. The spotlight followed her, glittering on her belt as she raised her hands to touch fingers with fans who reached toward her. Then she was stepping into the ring, arms raised again, demanding worship, and receiving it in adoring waves.

Pretty good for a sweet little swan from the boondocks, she thought, and then the show was on. Grappling and bouncing off the ropes, lifts and throws that required both parties to cooperate so nobody got hurt, mugging for the audience, sharing quick grins or discussions about the next move behind the curtain of their falling hair as they wrangled each other…Maggie loved all of it.

So did Sandy, and their matches were some of the best ones Maggie had ever wrestled. Maggie was careful to not use her full strength against Sandra—or any other non-shifter wrestler, for that matter—but Sandy was strong and sure of herself, which gave Maggie room to do a little more than she might have otherwise.

Tonight, though, it was Maggie who went up against the ropes, then was seized by the waist and neck, then thrown over Sandy's shoulder as both women slammed back-down onto the ring floor in a loud, showy display of athleticism. The crowd screamed and booed with delight as Maggie made a performance of agony, writhing around and clutching her back. Sandy stomped around the ring, encouraging the crowd in their boos, hisses, and cheers.

Their voices turned to a chant: Take the belt! Take the belt! Sandy paused in her circling, gazing in astonishment at the audience, then cunningly at Maggie. "Yeah? You think? You think I should take this hulk's belt? Think she's not worth it anymore? Is Mad Maggie Magdalene just sad saggy Maggie?"

Even Maggie had a hard time not laughing as the audience's cheers and jeers rose toward the rafters. Sandy bent to rip Maggie's belt off, the crowd's voices practically lifting them from the ring floor, before two of their coworkers—Devilish Denise and Tina "The Tiny Tornado" Thompson—stormed the arena together.

Tina, cute as a button and built like a tank, almost always placed a 'face' and Denise, with her jet-black dyed hair and goth makeup, was forever a 'heel'—one of the bad guys. They had a long-standing rivalry in and out of the ring that helped convince the audience that they would never team up, but as they came into the ring together, the audience rose to its feet with howling delight.

Sandy backed off, telegraphing fear, and tripped over Maggie. For a moment they were both on the floor, staring at each other with outrage and confusion.

Then Sandy's face changed, turning sly again. She rose and offered Maggie a hand. The audience screamed, half of them encouraging her, the other half protesting the possibility that their face-heel duo could work together.

Maggie made of show of listening to them, and then—of course—slapped her hand into Sandra's, letting the other woman haul her to her feet.

The next several minutes were splendid choreographed carnage. Tina was great fun to throw around because she was so tiny—barely five and a half feet tall, nearly eight inches shorter than Maggie—while Denise had brute strength that only Maggie could match.

Which made sense, because like Maggie, Denise was a shifter. They'd both joined AAE in their late teens, when the urge that struck all of their kind hit them, too. They were descended from gladiators, and the need to fight—even performatively—came as part of their heritage. Unlike most shifters, though, both Maggie and Denise had loved the showmanship. They'd continued their careers in the arena for years after the magic-born compulsion to fight faded.

And as long as the Lyell family who ran the whole company stayed out of the way and whose own ringmaster-born magic allowed them to control the gladiator shifters, Maggie would be happy to stay a professional wrestler forever.

Which wasn't something she should be thinking about in the middle of a match. Especially at the end of the match, with everybody's big finishing moves coming up, and her trademark 'madness' performance needing her attention.

Sandra caught her across the chest, the way they'd practiced it, and to the audience's eyes, it looked like suddenly it was three against one, everybody ganging up on Maggie. The crowd's voices rose, anticipating the next move as Maggie came to her feet, roaring.

To their eyes, she got a little bigger, somehow. A little more feral. A little wilder, more animalistic. The truth was, almost no shifter could do what Maggie did, and it was part of why she'd had such a successful career. She was able to bring her swan out, just a little, without making the change. She was able to release just that hint of wilderness, and to lean into it, hissing and growling, throwing her opponents around as if they were weightless.

Vaguely, beyond the sound of her swan's voice in her head, she could hear the announcer screaming, "There she is! There's Mad Maggie, releasing the beast within! Can the Disaster Duo withstand her? No one has before—but wait! Suplex Sandy is turning on Maggie! The Disaster Duo is the Terrifying Trio now, and not even Mad Maggie can stand up to them—or can she?!"

She could, of course. Unless Denise actually shifted, Maggie could clean their clocks. The hard part was not doing that, in fact. She roared again, all but beating her fists against her chest, and swept into them with the 'madness' she was known for. Fists and hair and feet flew, until in one combination move, the other three women united to throw her to the ground. Maggie landed hard on the ring floor, the breath knocked from her chest as she listened to the satisfying screams of the crowd.

It had been a match well fought. Her whole fan base felt she'd been cheated, since it took three of the other wrestlers to beat her, so the fans would all remain on her side when she turned heel for a while. In the meantime, Sandy and Denise would have a great time as faces that everybody hated, although they were both such good performers that the audiences would be eating out of the palms of their hands within a few weeks.

Maggie, exhaling into her 'faint', turned her head to the side, looked straight into the ring-side gaze of Conri Lyell, estranged son of the ringmaster family, and, horribly, it appeared…her fated mate.

Other Books By Murphy Lawless 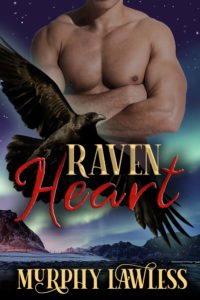 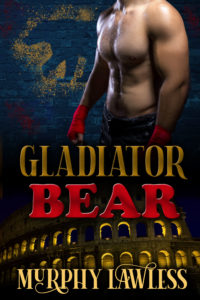 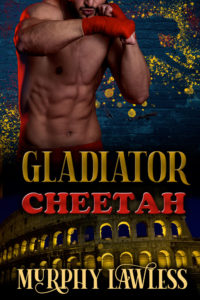 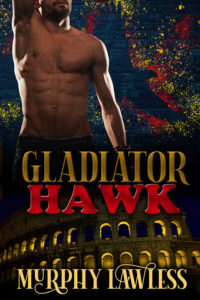 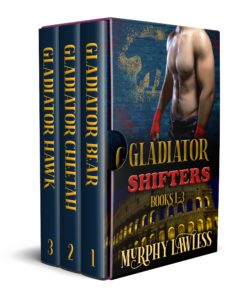 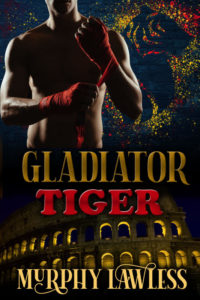