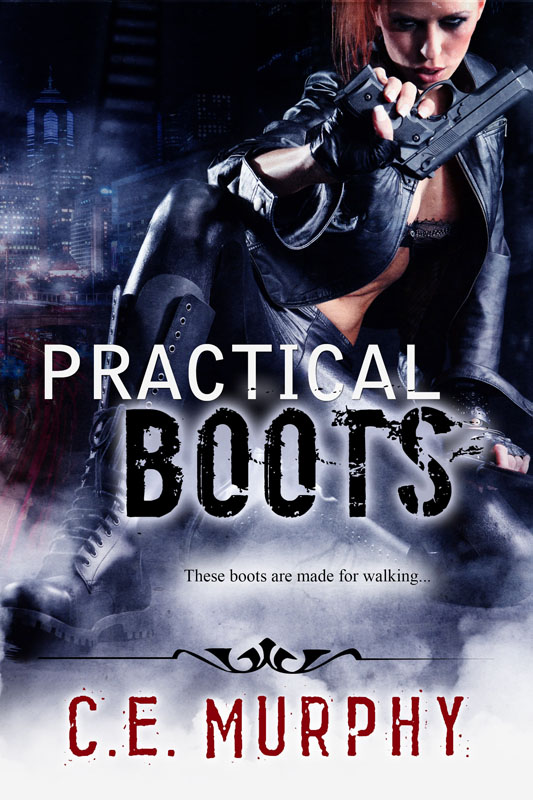 Part of the Stand-Alones series:
Editions:ePub

These boots are made for walking...

The disappointing daughter of a Lord of the Torn, Cat Sharp was dumped in the shapeless Waste to prove herself or die. Seven years later, she's honed the Artificer magic that saved her in the Waste, and her courier business is booming: after all, no one else can step from one location to another almost instantaneously, as Cat can with her seven league boots.

Each passage through the Waste takes her one step closer to the only thing she's ever wanted to find...but even the Torn-born become careless at times. When Cat's father catches up with her again, Cat must make a choice between her own dreams and an innocent's future...or try once more to forge her own way through two worlds, neither of which she quite belongs in....

They came for her the moment she stepped into the Waste.

Later she would berate herself for her foolishness. There were reasons to enter the Waste at the same point every time, good reasons, but she should have known that sooner or later, habit would do her wrong.

Later, she could examine her anger at the mistake at her leisure. In the moment, though, she needed to survive.

Survival defined her, and had for as long as she could remember. Since before the first time she'd been dumped in the Waste beneath the watching gaze of a glittering inhuman court. Then, they had told her they honored her with the opportunity. That she, a half-mortal child, could attain power—could attain legitimacy—by surviving the empty, ruined space between the World and the Torn.

They had left the unspoken part hanging: that children born of both the World and the Torn never did survive this particular honor. That she, like all the others, would die, and leave her father's bloodline to be rebuilt with a woman of the Torn, instead of the World.

Cat had sworn, as the host faded away, that she would survive, and that she would do so with the express purpose of killing the son of a bitch who had fathered her, raised her, and dumped her there.

Driven by that promise, she shaped her first Artifact from the very stuff of the Waste itself. Later, she learned that—in human parlance—the first hit was free. Artifacts, those objects of power so coveted by the people of the Torn, took both power and sacrifice to create. But that was later; the price always came later.

Cat had some ideas about what else it took, but she kept those stuffed down deep in her mind, where 'browsers'—those whose power allowed them to snoop out thoughts—couldn't touch lightly on it, and where their truth couldn't show on her face in an unguarded moment. But those thoughts, like so much else, had come later. Later, where her life always seemed to hang, waiting for her to catch up to it. At the time, she had taken her will to survive and taken the shapelessness of the Waste, and molded them together to build an escape, because nothing could long survive in the shifting space between the World and the Torn. She drew on her need, and on the true threads of ancient stories, and on the bloodline that had, as it turned out, both condemned and saved her.

She fashioned boots from the grey of the Waste, and when she put them on, when she stepped with them, she traveled seven leagues and more.

She traveled into the World, into loudness and brightness and swarms of humanity. Terrified, she stepped back into the Waste and left again at a different angle, desperate to come out elsewhere. Still in the World, but in a place of peace. Meadows, with birdsong and silence and soft wind that ran on forever. There, no distant sound warned her of what she would learn to call cars, or airplanes, or even of the hum of electricity rushing through wires.

The Torn was built of such places, and their peace lied.